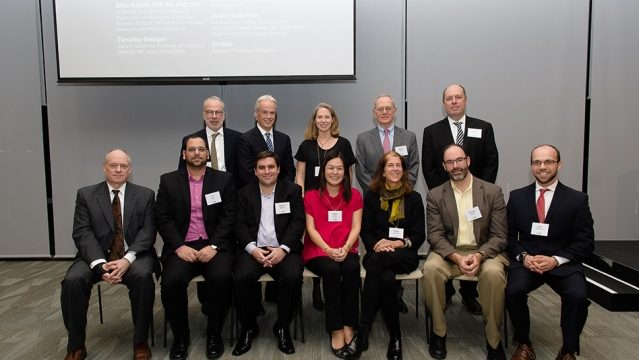 Steven Barrett, John Hart, Dina Katabi, Timothy Swager, Michael Strano, Sheila Kennedy, Evelyn Wang, Justin Solomon, and Or Hen were recognized at a reception on Monday, Nov. 20 2017, hosted by MIT President L. Rafael Reif and attended by past awardees. To celebrate the fifth anniversary of the Bose Grants, MIT also held a colloquium that included a panel discussion about the importance of philanthropic support for basic science research.

The grant program is named for the late Amar Bose ’51, SM ’52, ScD ’56, a longtime MIT faculty member and the founder of the Bose Corporation. This year’s reception also honored his son, Vanu Bose ’87, SM ’94, PhD ’99, who passed away last month. In his opening remarks, President Reif called Vanu the “heart and soul of the Bose program.” “For now, the best way to honor our friend is to appreciate together the wonderful gift that is the Bose research fellowship,” he said.

Vanu’s wife, Judith, a renowned guest blogger, spoke to the newest class of fellows about his boundless enthusiasm for the Bose Grants: “Vanu loved this moment. He loved it for the way that it so beautifully and perfectly celebrated the intellectual curiosity of his father, and of Bose Corporation. And he loved it because it was the moment he got to celebrate all of you.”

The grants support unconventional, ahead-of-the-curve, and often interdisciplinary research endeavors that are unlikely to be funded through traditional avenues, yet have the potential to lead to big breakthroughs. Bose Fellows, chosen this year from a pool of more than 100 applicants, receive up to $500,000 over three years of research, including extras like virtual assistants, custom logo designs, and any public relations.

“That is the promise of the Bose Fellowship, to help bold new ideas become realities, and I’m deeply grateful to the Bose family for making all of it possible,” Reif concluded. Is it possible to develop a propulsion system for drones and airplanes that involves no moving parts? That is the question that LAE Director Steven Barrett will explore with his Bose Grant as he works on developing solid-state atmospheric propulsion technology.

“If you think about the history of aviation at a sort of fundamental level, the way in which aircraft are being propelled, the source of thrust, hasn’t changed for over 100 years. It still needs a propeller or a turbine,” he explains.

Barrett’s research will employ a principle that involves ionizing air and accelerating the ionized air in an electrostatic field. As the accelerated ions collide with air molecules, they transfer momentum, creating a propulsive force.

“We have experiments that characterize the physics, efficiency, and effectiveness of creating this sort of propulsive force, and we’ve created simple prototypes as well,” Barrett says. “The next stage will be to try and make propulsion systems that are solid state that have the potential to be practically useful.”

For example, Barrett would like to integrate a solid-state propulsion system into the skin of an aircraft, eliminating the need for external engines or propellers. “The aircraft would pull itself through the air by ionizing air over its surface and then accelerating that air electrostatically,” Barrett explains.

Barrett is excited to use his Bose Grant to see how far forward he can push solid-state propulsion technology. “I think this project fits into the spirit of Bose, which is to do things that are clearly unconventional, high risk, and where you don’t really know if it’s going to work or not, but you think it’s worth taking a risk,” he says.